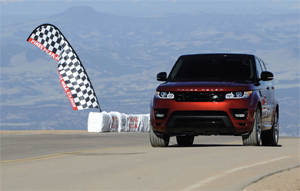 For motorsport enthusiasts, the news that the new Range Rover Sport has just beaten the record for the production SUV class at the Pikes Peak hill climb in Colorado, USA, is a cause for celebration. This has to be the world’s most challenging hill climb, a 12.42 mile climb that includes 156 corners and rises some 1440m to the summit, which is at 4300m. It’s not for nothing that it is known as the Race To The Clouds. This was a serious record attempt, and JLR had Pikes Peak expert Paul Dallenback behind the wheel of the Sport. Dallenback has won the event three times, and you should check out the You Tube clips of the open wheel specials that these guys use to compete when the official event is run. Getting into the cossetted confines of a Range Rover Sport must have been very different for him, even if the model had the 5.0-litre supercharged engine delivering over 500bhp – although whether the unit was delivering that amount of power at the rarefied heights towards the end of the course is unlikely! The Range Rover completed the course in 12 minutes 35.61 seconds, which is an average of 59.17mph. Remembering this is a production 4×4, you can compare that with the outright record of 9 minutes 46.16 seconds which is held by Rhys Millen (off-road racing legend Rod Millen’s son) in a specially built Hyundai Genesis Coupe race car with 900bhp and 800lb ft of torque. Coincidentally, Paul Dallenback will be driving the 2013 version of the Hyundai at this year’s event, which is held at the end of June. The production record for the Range Rover will certainly do much to underline the Sport’s abilities to potential American customers.