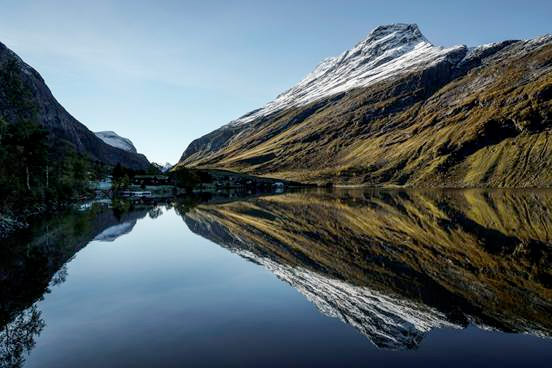 This shot shows the vast mountains reflected in Lake Eidsvatnet in Møre og Romsdal county. I am a very simple photographer – there is very little hocus-pocus about what I do and for me it’s all about seeing, reacting, using my feet – and this was simply the right shot captured at the right time

Land Rover worked closely with world-renowned photographic agency Magnum Photos to showcase some of the most breathtaking landscapes on Earth.

To launch the series, Norwegian photographer Jonas set out to capture the dramatic landscape of his home country. Range Rover’s intelligent technology, Terrain Response 2, enabled him to reach superior vantage points off the beaten track. It automatically selects one of its individual driving modes to suit the terrain and optimises the vehicle’s settings for all conditions and surfaces.

Jonas and his crew began their journey in the distinctly modern urban environment of Oslo, where they explored some of the city’s award-winning, innovative architecture. They then travelled northwest through the Dovre mountains via the epic switchback roads of the Trollstigen.

Here we have the view of Geiranger village and fjord, seen from Flydalsjuvet, a gorge with rocky outcrops and waterfalls. The name Geiranger most likely comes from the old Norse words for ‘spear’ (geirr) and ‘fjord’ (angr) and the 15km long Geiranger fjord is one of the most famous fjords of Norway. In 2005 it was listed as a UNESCO World Heritage Site, and was in 2006 named by National Geographic as the most well preserved of all the UNESCO world heritage sites. The nice thing about working in Norway at this time of the year, in the autumn, is that I passed through a huge variation of different landscapes. It’s a gorgeous time to be there.

They also visited the snow-covered plateaus and vast fjords of Geiranger as well as the Art Nouveau-inspired town of Ålesund. The entire expedition was completed in a production Range Rover TDV6 Autobiography, which transported Jonas, his crew and all their equipment. The Range Rover is the epitome of luxury, with clean lines echoing the modern architecture of Oslo and the unique capability that allows it to take such an expedition in its stride.

Jonas said: “I spend my entire life chasing that perfect picture, but part of the joy of it is in that hunt. Photography is for me a language, a way in which I can express myself, and it has become a way in which I see the world.

“I love trips I can do entirely by driving. When I’m on the road I can stop anywhere and capture an opportunity in an instant. The Range Rover was the perfect partner for me in that respect.”

Norway is made up of more than 50,000 islands and has an 83,000km (51,000-mile) coastline of fjords, bays and inlets. Few places in Europe have a lower population density, so remote living is ingrained in the national psyche. Yet it is also home to some of the world’s most dramatic modern architecture, resulting in a breathtaking contrast between vivid remote and urban environments.

Further locations for the Ultimate Vistas series will include the USA and China.