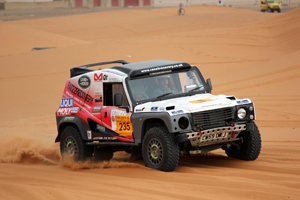 The Race2Recovery team, comprised primarily of injured British servicemen, has achieved what can only be described as an extraordinary result on its international rally raid debut. Both of the team’s Qt Wildcats finished the eight-day event and in the process, claimed a stage win for each competing member of the team.

The Tuareg Rally returned to Spain on the final day for a short special stage running through a dried river gorge to the finish of the event in Mojacar. However, during the course of the event, the crews had faced almost every conceivable terrain when it comes to Rally Raid racing, including harsh, rocky gravel tracks, wet and muddy roads washed away by heavy rain and of course, the sand dunes of the Sahara desert.

First of the two crews was Dave Marsh and Tom Neathway, driving the Orange Plant Wildcat and finishing the event in tenth place overall. Dave and Tom had their fair share of problems on the event, including mechanical issues such as differential and wheel bearing failures and, like many other competitors, getting stuck in the sand dunes of the desert and having to extract themselves from the situation.

However, they clearly demonstrated their grasp of the Wildcat and their understanding of the sand dunes, by claiming the team’s first international rally stage win on the final day of the action in the Erg Chebbi dune field. Despite a last minute scare, when they rolled their car in treacherous cross-ruts in the final special stage, they arrived at the finish with no problems.

Sharing driving and navigating duties in the RatCat were Tony Harris and Ben Gott, as the Tuareg Rally allowed them to each gain experience of driving in all conditions, as well as the navigational techniques. They also had their share of issues, with time lost getting stuck in the desert due to a recurring engine misfire and a very unlucky roll, when they crested over a knife-edge sand dune with a shade too much power.

Ben and Tony also went on to claim their first international event stage win, going through the second of the penultimate day’s special stages fastest, to notch up the third of the team’s three fastest times. They eventually finished the event 25th overall.

While Tony and Ben claimed the third, it was Phillip Gillespie who took the second. Originally scheduled to compete on the event, a last minute change meant that Phillip was on the Tuareg as part of the mechanical team. However, he was asked by several competitors to stand in for their co-drivers for various reasons, a task which he approached with vigour and professionalism. Such was his performance that he guided Jonnie Koonja to the win on the first of the penultimate day’s two stages.

Despite the issues with the cars, both were maintained flawlessly by the Race2Recovery mechanical team, headed by Mechanical Manager Dave Reeve. None are professional motorsport mechanics but rather, current or former servicemen who gave their time to support the team’s charitable work.

The team’s next event will be on familiar ground, as it heads for the first round of the British Cross Country Championship in April.