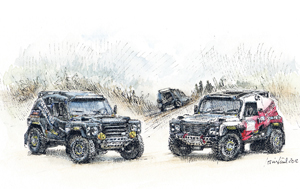 Members from ALRC affiliated Land Rover clubs as far away as Germany reached deep into their pockets to support an evening auction for Race2Recovery, raising a total of £2700. Held during the ALRC National Rally at Belvoir over the Jubilee weekend, the auction featured, among other goodies such as the original 2012 National Rally artwork by Pete Wilford, the first of a limited edition of prints from her drawing of the R2R Wildcat Land Rovers (pictured) by 4×4 Magazine’s own contributor Louise Limb. The framed, signed print raised a whopping £260 for R2R but if you missed out, you can still buy one of the remaining 24 A3 sized giclee reproductions, signed and numbered, from Louise’s website for £50 including UK post and packing, with £10 from each sale going straight to Race2Recovery. Hurry before they all go and do your bit to help these amazing guys. www.louiselimb.com