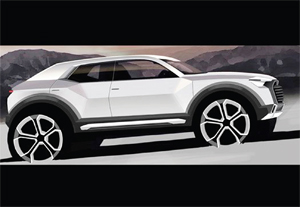 In the last issue, we commented on how the new Porsche Macan had effectively turned Porsche into a full-blown SUV manufacturer, that happens to sideline in sports cars. News this month from Audi confirms that at present some 28 per cent of this manufacturer’s sales are SUV models, and this is expected to rise to 35 per cent in 2020. This growth will certainly be supported by a new ‘small’ SUV, the Q1. Audi’s ‘Q’ series of four-wheel drive SUVs have now totalled some 250,000 vehicles since the first model was launched in 2006.

There’s not much detail yet about the Q1, but Audi’s CEO Rupert Stadler has declared it will be “a key component of our growth strategy. It is designed on the basis of the modular transverse engine concept and will round off our Q series at the bottom end.” Slightly odd choice of words, and the publicity sketch released by the company does little to show what the new compact SUV will look like, looking more like a teenager’s doodle of some proposed PlayStation computer game machine. However, it can be expected that it leans towards the small ‘sporting’ section of the SUV market. The Q1 will be produced in Ingolstadt and the first models are not expected until 2016.