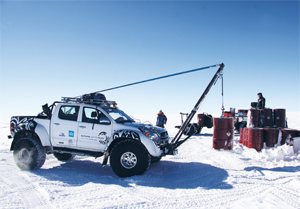 Laying ourselves, or at least the Editor, open to cries of bias, it was great to receive news of the latest achievements of the Toyota Hilux. The pick-up has just completed a marathon Antarctic journey of over 5900 miles – without a hitch. This adds to the Hilux’s achievements of reaching both the North and South Poles. The vehicles were used in the double trans-continental crossing as part of the Extreme World Races and were powered by standard 3.0-litre D-4D turbo diesel engines and transmissions. Because of the extreme cold, the engines ran on Jet A-1 fuel and in total there were 10 Hilux pick-ups involved in setting up various fuel depots. You have to wonder what Captain Robert Falcon Scott would have thought about that – his fuel depots contained seal blubber and now people are leaving jet fuel there so they can drive about the place without the need for dogs and sledges, and all this change in only 100 years.