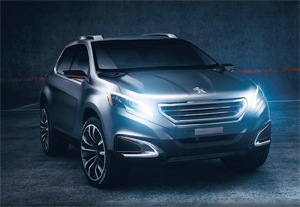 Peugeot used the Beijing show to unveil its new Urban Crossover Concept vehicle, aimed at the B segment. The French company’s road car range includes some funky designs and this has been transferred to this crossover concept, including the aluminium spoiler and the double roof bubble that are reminiscent of the Peugeot RCZ Sports Coupe. Although initially a concept, the car will make its European debut at the Paris Motor Show this September when production details are likely to be announced. China was chosen since the French manufacturer has a strong affiliation with with its Dong Feng Peugeot set-up, sales within China having increased by 28% in the last year.