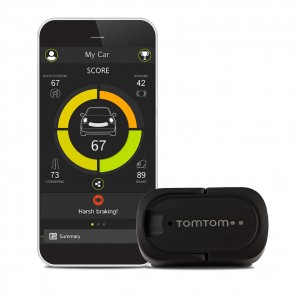 TomTom has announced the consumer launch of its TomTom CURFER performance tracker for cars. Plug this into the vehicle and read out data on a connected phone to improve driving performance or help save on fuel. From cornering G-force to acceleration and braking efficiency, the TomTom CURFER guides drivers to perfection while gamifying the experience with rewards and social sharing.

The TomTom CURFER could actually help save drivers money on fuel, brakes and tyre costs by helping them drive more efficiently. It’ll even let drivers find the car from their phone’s map when out and about.

Other cool metrics that will be fun to track include the car’s battery voltage, oil temperature, engine load and plenty more. By using a red alert for any issues with these levels, drivers can relax the rest of the time knowing the car is running as it should.

Corinne Vigreux, co-founder and managing director, TomTom Consumer, said: “We want people everywhere to drive smarter, saving money and reducing their impact on the environment. I like to think of the TomTom CURFER as a translator between the driver and their car – helping people to make better decisions about their driving style in a really fun and engaging way.”

The TomTom CURFER connects to a car via its OBD (On Board Diagnostics) port which can be found on most cars made after 2011. This then connects to a smartphone via Bluetooth® so the CURFER app can beautifully display all the data.

The TomTom CURFER is available to pre-order now in the UK, Germany, France and the Netherlands via the TomTom website. RRP is £59.99.