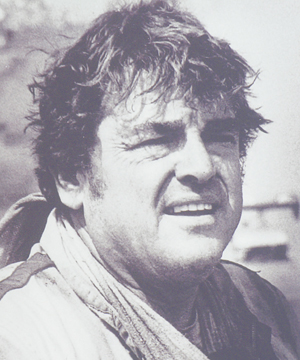 Marion (‘Mickey’) Lee Thompson, Jr, was born on December 7th, 1928. When he was 14 years old he bought his first car on his allowance, an old Chevrolet for $7.50, which had been sitting out in the open with its cylinder head off. Mickey had to drive the pistons out with a sledgehammer. It took a year and a half but he _ nally did get it running and he sold the car for $125.00, all before he was old enough to drive it.

After a long career racing at the Bonneville salt _ ats, the Indy 500 and drag racing, Mickey started off-road racing in the late 1960s. “Hell, the best part of the show was out there in the desert and it was being put on for rattlesnakes and lizards. I decided to promote closed-course versions of offroad racing and founded the Short-Course Off-Road Enterprises (SCORE) and began building my own versions of off-road sprint vehicles,” he said in an interview in 1985.

Mickey also created the SCORE Off Road Equipment Show, a trade event for the offroad and 4×4 industry.

About this same time Mickey hooked up with Michael Goodwin, an egocentric promoter of stadium motocross races. His ‘Supercross’ series put on events at some of the same venues as Mickey and they agreed to work together on scheduling their events.

Unfortunately, the business relationship with Goodwin was a disaster and when Thompson and his wife Trudy were gunned down and killed in 1988, it became clear it was a contract killing on behalf of Goodwin. In January 2007, a jury in LA County found Michael Goodwin guilty of murder.