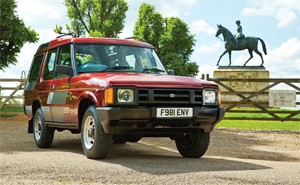 To celebrate the UK debut of the Discovery Concept and the 25 years of Discovery, we were permitted to drive along her Majesty’s front drive at Windsor Park. The three mile long drive is arrow straight. Standing at the start, the grandeur of Windsor Castle is obvious, but it does seem a long way away. OK, so we trundled along at a very slow speed, avoiding the many pedestrians enjoying the spring sunshine but it was something of an honour. While my drive around the park was indeed special, it was increased by the enjoyment of getting behind the wheel of Land Rover Discovery F981 ENV. This is the first production model of what later became known as Series 1 (it’s doubtful at the time that confidence was high enough to consider if there would ever be a Series II, let alone III, IV and now the Concept). This actual vehicle was handed over to the Heritage Collection directly from the production line and it probably looks even better today than it did back in ’89! Climb aboard and it feels like yesterday. The Terrance Conran-inspired interior still looks stylish and modern, the ultimate compliment for any design. Thinner A-pillars help as well, but it is still a great place to sit; the high roof helping, big hats are no problem in a Series 1. Turn on the ignition and the 2.5-litre 200TDi four-cylinder turbocharged diesel rattles to life, the steering wheel vibrates and there’s a hum through the whole body. Having previously been driving the very latest super-smooth Discovery, this comes as something of a shock. It’s not a criticism, however, just a comment that today we forget just how damped and noise-supressed modern new 4x4s are.

F981 ENV is treated like a hot-house flower and given no-expense-spared attention, but that aside it drives smoothly, lacks jumps and judders, and has a slick gearbox where you know by feel that you are selecting a mechanical gear; none of this multi-gear automatics. Oh joy of joys, you are driving a vehicle that is not submerged in sensors and computerised control. If this thing stalls, it’s the fault of the nut behind the wheel, not the ECU. Somehow stalling this Discovery at Windsor would be the equivalent of motorised treason. On the same day, I also drove a Series II, III and IV and had the option to try the Millionth Discovery, but this spring, on a sunny morning at the Royal House of Windsor, this was the only one for me. When I got behind the wheel the odometer read 1367 miles. When I finished, it probably only read 1368, or maybe 1369. What the heck, it’s one of the most enjoyable miles I’ve had behind the wheel of a Land Rover. NF