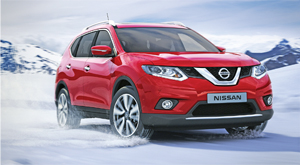 Apparently, its ‘sculptured muscular lines create a distinctive silhouette’ well, not to us anyway. Maybe it will look ‘distinctive’ in the metal and on the road, but from these early release pictures, the new Nissan X-Trail looks like… well, all the other SUVs on the roads, which is a shame because at present, the X-Trail is probably one of the most distinctive SUVs on, and off, the roads.

The recent Frankfurt Motor Show was the venue for a number of premieres and new concept vehicles. Nissan showed its latest X-Trail, and its US version, called the Rogue. It’s built on the jointly developed Nissan/Renault Common Module Family (CMF) platform and will be available in some 190 countries around the world. That’s some claim, and underlines the importance of the vehicle; to get to 190 countries the X-Trail will be built in no less than nine different manufacturing plants around the globe.

If we are less than impressed with the initial looks, it’s good to report that the new model’s details also claim the X-Trail will be ‘highly capable off-road for every adventure’. This means that the X-Trail will continue with the ALL MODE 4x4i system, together with what have been described as world firsts; Active Ride Control and Active Engine Brake. The Active Ride Control alters the vehicle’s suspension damping, depending on the undulations detected, thereby improving the ride and control ‘roll’ when off-road. The Active Engine Brake works through the Xtronic transmission to add a degree of engine braking when cornering. This is said to offer better braking control with less pedal effort. The new X-Trail also has Uphill Start Support and Advance Hill Descent Control. All the clever electronic stuff is also included in the NissanConnect, which offers smartphone connectivity and all the associated apps linked to navigation, music and social networking. First models will be unveiled in the first quarter of 2014 and worldwide sales starting next July.

As Bob Cooke explains in this month’s Marketwatch (see page 94), the new X-Trail does mean dealers will be wanting to clear their stocks of ‘old’ X-Trails, which could well mean some excellent bargains out there for those of us that prefer the ‘old school’ models and not the jelly mould ubiquitous uniformity of the latest SUVs. 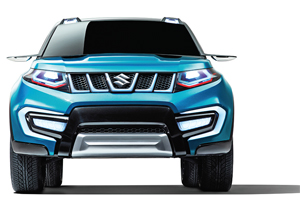 Talking of which, check out the concept Suzuki iV-4, which apparently has a ‘central development theme’ (sorry, no idea), which is ‘Grab your field’ (no, still don’t understand). The name refers to the ‘i’ being individuality, ‘V’ for vehicle, and ‘4’ representing four-wheel drive and is likely to be the basis for the new Suzuki model to compete with Nissan’s Juke, and due to be launched in 2015. It will be fitted with Suzuki’s new ALLGRIP four-wheel drive system (fitted to the new SX4 S-Cross, reviewed on page 20 of this issue). In the concept pictures shown here, the vehicle does sit ‘high’ and have a pretty good road presence. From some angles, there’s more than a touch of the Evoque in there. But it must be remembered that this will be a smaller vehicle if it is produced.

And we finish with a model that we can at least praise for not looking like every other SUV on the market! From the front at least the Lexus LF-NX concept SUV is certainly distinctive, whether it’s to everyone’s taste is a different matter, at least it is different! This concept is a hybrid SUV, although little technical detail was released as we went to press. According to the details that were released, however, the interior is ‘Human Orientated’… Honestly. Quite what planet the people that write the marketing blurb for these concepts live on, we are not sure, but if the LF-NX goes into production, the fact that it’s been designed for humans will probably be of some relief to the more down-to-earth salesmen in the dealerships.