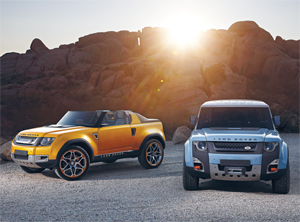 So, the campaign continues. And this time the stage was the Los Angeles Auto Show in the US. We can expect to be seeing the ‘new Defender’ DC100 and DC100 Sport at numerous high profile motor shows and publicity events over the coming year, as Jaguar Land Rover gauge public opinion, or merely convince public opinion (depending on your point of view) as to what should be the production version specification, and final design, of the replacement Defender. During this period, information will be drip-fed to the public, and every word spoken by Jaguar Land Rover executives will be scrutinised for any clues.

In Los Angeles, there was talk of selling the DC100 to the Third World (following in the footsteps of the original Land Rover) but this was matched by photo-shoots on the beach at Malibu… Third World? More another world. John Edwards, Jaguar Land Rover’s Global Brand Director, was reported speaking about ‘fine tuning’ the DC100, which would mean (as we believed from the off) that the company is pretty sure of the design, the specification and the plans for production and sale. Edwards also spoke of the DC100 being available in the US from around 2015. The present Defender hasn’t been sold in the US for around 15 years, as the aging design doesn’t meet the stringent US safety regulations, and the cost of modifications has always been prohibitive. He was also asked as to what vehicle he saw as the direct competitor, to which he replied the Jeep Wrangler – for its off-road abilities, if not its design sophistication – which means we will be able to continue with our Icons battle in future 4×4 Of The Year tests!

One model that is going directly on sale in the US is Honda’s latest version of the successful CR-V. A completely new look for this fourth generation model, the Americans can buy one now, whereas the European models – which will be built at Swindon – will not be available until the autumn of 2012. The Americans get a class matching four cylinder, 2-litre engine, producing around 185bhp, five speed automatic gearbox, “new infotainment features” (!) and a clever folding rear seat mechanism for additional load space. It is interesting that the US gets this model first, before the rest of Europe.

This year’s 4×4 Of The Year has, for the first time, tested an Infiniti. Los Angeles saw the unveiling of a seven-seater crossover Infiniti, called the JX. This is actually built at Nissan’s Tennessee plant, where it shares the same production line as the Murano. Presumably that’s also where it also shares some of the more prosaic Nissan’s trim and switchgear – something that was noticed on the Infiniti tested in this issue, and something that does limit the ‘exclusivity’ tag that these models are sold with.

Jeep displayed a new special edition Wrangler, somewhat perversely given that the show was in sunny California, it was called the Liberty Arctic, and came complete with its Winter Chill paintwork. It has ‘polar white accents’ inside apparently but what we really liked the sound of was the ‘Yeti’ footprint decal on the body. I guess there’s no point in telling the Americans that if there is a Yeti, it doesn’t – reputedly – come from anywhere near the Arctic. Great set of wheels though!

Heading the political expedient, ‘let’s-buy-a-car-and-save-the-planet’ brigade at Los Angeles was Ford with its new Escape model. Apparently, the vehicle’s carpets have a slight tint of green, because they are made from recycled plastic bottles; green ones, presumably. Joking apart, this is quite fascinating and matches the recycled bottle top insulation material found in the Evoque. Ford’s Escape is the biggest selling SUV in America and the latest version is packed with sophisticated new technology including voice commands to allow you to run audio, phone, climate and navigation systems. There is something of a conundrum that Ford has a best-selling SUV in the States, but in Europe it has the….?