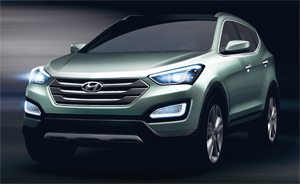 Pictures of the third generation of the very popular Hyundai Sante Fe have been released. Code-named the DM in Korea, the new model will make its world premiere at the New York International Auto Show this April. Despite the code-name, Hyundai will be keeping the Sante Fe name for the new model, which was first seen in 2000. Impressively, the total sales of the 4×4 is around 2.56 million units. The new look, which from these pre-release pictures looks very conservative, follows Hyundai’s design concept with the much more dynamic title of ‘Storm Edge’. The company talks about “sophisticated and refined lines, which are in harmony with bold and voluminous surfaces, completing a more aggressive and classic look than its predecessor.” It would appear that the third generation is going to be ‘softer’ than the original design concept, but will again offer good value for money and good carrying capacity – both for people and their luggage.