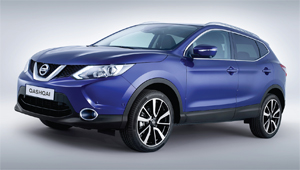 Can you believe that Nissan has actually produced two million Qashqais since the models introduction in 2007?! Those sorts of numbers mean that the latest version is obviously a very important launch. The new model is 49mm longer and is also slightly lower and wider. It’s been designed by Nissan Design Europe (based in the UK) with support from Nissan Technical Centre Europe (that’s at Cranfield, UK) and will be built in Sunderland. So, even if we are not that impressed with the model as an off-roader (and memories of the X-Trail and Pathfinder linger) then we are certainly pleased that the model exists and is built in the UK. As far as the numbers go, most Qashqai sales are for the two-wheel drive versions, but the four-wheel drive models are still available using Nissan’s ALL_MODE 4×4-I driveline, which can be matched to either six-speed manual or the all-new Xtronic automatic transmissions. The company also has the belief that owners and potential owners are keen on all the latest hi-tech communications and entertainment systems. The new model also has Front Collision Avoidance, Driver Attention Support, Intelligent Park Assist and Traffic Sign Recognition. Models will be available in the UK from February 2014.