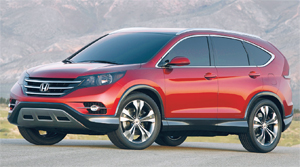 First built back in 1995, and with some five million having been produced, Honda’s latest version of the CR-V will be available in the UK in October. This is the fourth generation and has been comprehensively re-designed. Ironically, this was being written as the news announced that Honda’s factory in Swindon is going on a four-day week. The new model will be available with the 2.0-litre i-VTEC 155bhp petrol and 2.2-litre i-DTEC 150bhp diesel engines. Full technical spec and prices of this latest SUV will be announced nearer the on sale date.