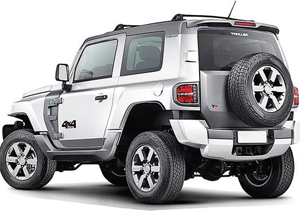 In our Genius Tyre feature (September 2014) we have pictures of the Troller – not a vehicle with which we were that familiar. However, this model, built by Troller, a subsiduary of Ford do Brasil, looks like a Jeep Wrangler and Suzuki Jimny with a touch of Land Rover Defender could be thought as the successor to the Bronco. Sadly, there are no plans to sell the Troller in the US, although we understand that American off-road magazines are calling for it to be available, something that we fully support. The Ford Troller has heavy-duty Dana axles, an anti roll bar disconnect feature (like the Wrangler) and 17 inch wheels. It has a snorkel as standard equipment. Now, obviously the forthcoming Edge will be important for Ford’s balance sheet, but just imagine what the introduction of a European Troller might do to the company’s overall image. Who needs park assist and lane change warnings? What ever happened to ‘fun’?