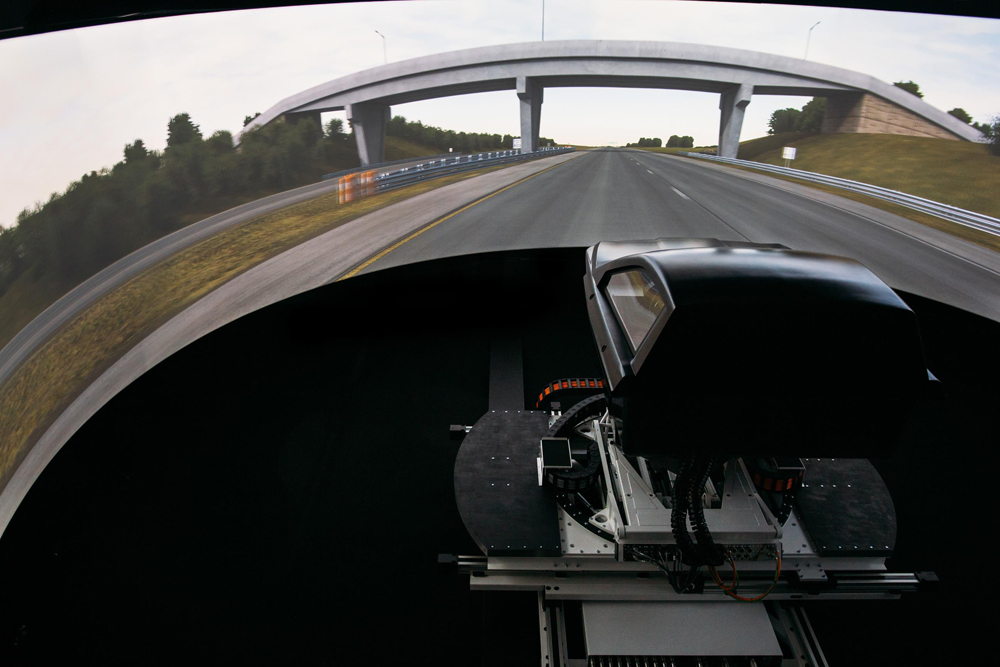 With more people set to be reading or using screens in their autonomous cars, engineers are already turning to simulation technology to prevent sickness in the car

When self-driving cars become the norm, we’re going to have much more spare time, as we’ll no longer be chained to the steering wheel with our eyes locked on the road ahead. This is brilliant news as we’ll have more time to read, work and play driving games on our phones instead. But it could have one downside: Motion sickness.

Motion sickness is already a problem for many passengers – and when we all become passengers, it seems inevitable that it’ll get worse. In fact, experts are already predicting that between 6% and 12% of Americans can expect to get sick travelling in an autonomous vehicle.

But there is some good news: Car manufacturers today are already working on designing vehicles that will mitigate motion sickness – and they are using driving simulator technology from a UK company called Ansible Motion to do it.

The simulator is different to the sort that powers driving games or trains pilots. According to Ansible Motion’s Technical Liaison, Phil Morse, this type of simulator, called “Driver in the Loop,” is “dynamics-class”. This means that it isn’t just for measuring human reactions, like other types of automotive driving simulators or how a flight simulator for training pilots might be – but thanks to some sophisticated engineering, it can be used to virtually prototype vehicles and different on-car components.

This is particularly important for modern cars – and indeed, autonomous cars – because they involve a complex array of different sensors and on-board systems, which need to play nicely with each other. For example, there’s an entire array of collision sensors and detection algorithms which are mission critical, so it is important to develop these systems with care and consideration, and also to give them the “computational authority” to execute in real time – as it is no good if an object is detected ahead if you’re already wrapped around it and waiting for an ambulance. And rather than have these test scenarios play out for the first time in the real world, it is much safer to figure them out in the lab setting.

The value of a driving simulator in the design process then is this: Being able to switch out and test individual components in thousands of different scenarios, with real people behind the wheel, without needing to actually build a car to start with. In fact, without the simulator it may soon be impossible to design a modern car without going to utterly enormous expense.

And this is where the technology can be put to work on motion sickness.

Motion sickness is caused when the images we see fall out of sync with the movement we feel. It’s why, say, reading a book or watching a video while a passenger in a car can make us feel queasy – as there is a disconnect between what we’re looking at and the feeling of the road bumping beneath the seat and trees zipping by in our peripheral vision. It can also happen when playing with virtual reality for the same reasons.

Ansible Motion’s driving simulator enables designers to test different components and conditions entirely virtually – changing things like the shape of the windows, the vibrations from different road surfaces, sound levels and the car’s suspension. By swapping these components around virtually, designers can see what combination gives the smoothest ride. This means that when the first physical prototypes are created they are already designed to mitigate motion sickness.

“Our own simulation methodology, by default, inserts a layer of controllable sensory content – for motion, vision, haptic feedback, and so on,” Morse says. Normally, there are no modifications made to this “layer” of the simulation, but he indicates that one way of studying motion sickness is figuring out how to induce it deliberately, by tweaking the simulator’s settings. “This can be a useful way to explore human sensitivities while people are engaged in different tasks inside a car. And then the understanding of these sensitivities can wrap back around and inform the real vehicle design,’ he explains.

So the future could be significantly less nauseating – and it’s a good example of the power of a dynamics class simulator. Ansible Motion is ahead of the curve in this respect, as the need for pre-testing components in simulators is going to become even more crucial as we start to transition to autonomous vehicles.

The reason for this simple: Safety. Maintaining the trust of motorists and passengers is going to be crucial if we’re to transition to autonomous vehicles successfully. But making the switch will be difficult by the very nature of the transition. Cars will have to handle both autonomous driving, on roads such as motorways and then switch to manual controls when drivers turn off into more environmentally complex cities.

The injection of a human element adds an extra layer of complication – as unlike machines we are often unpredictable. So computer systems need to be designed to work with all of our quirks and flaws. But given this, the introduction of driving simulators to the design process should be a good sign – as not only will they help autonomous vehicles cope with the things that make us human, but they’ll help make travelling a better experience all together.

With more opportunities to read and use screens in future autonomous cars, engineers are already looking to simulation to find solutions.

Ansible Motion’s driving simulator enables designers to test different components and conditions such as the shape of the windows, the vibrations from different road surfaces to see the effects on motion sickness.

Engineers can induce feelings of sickness by adjusting the simulator’s settings and see the effect on the driver whilst they are reading or doing other tasks.