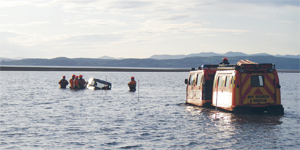 Morecombe Bay claimed another unfortunate victim recently when a Land Rover became stuck in a channel just off the shoreline near Bolton Le Sands. The vehicle had become trapped while driving on the beach in the soft sand in the bottom of a water gully. Several attempts had already been made by members of the public and local farmers with tractors and ropes to get the vehicle out, but with no success, which led to a call to Gary Parsons, station officer of Bay Search and Rescue.

However, by the time the call was made, it was already after dark and the tide had already engulfed the vehicle. As there was no life at risk the decision was made not to mobilise the team due to the obvious dangers involved with any attempt at a vehicle recovery in the dark and during high tide. Instead it was decided that as the vehicle would now be irreparably damaged and as BSAR is manned by volunteers with day jobs, the team would travel around the coast to the Lancashire side of the bay on the Monday evening to attempt a recovery simply to remove the vehicle from the beach as it would be a danger to the public, and so the owner would salvage what he could. The team could at least benefit from the awkward position of the vehicle and its potential recovery as a live flood rescue training exercise.

Bay Search and Rescue have some very unique vehicles to assist in these situations, including two Hagglund BV206 tracked amphibious rescue vehicles that are well suited to the bays treacherous sands, even in a moving tide. The team used their vehicles extensively in Cockermouth during the floods where they worked in partnership with Cumbria Fire and Rescue. Unfortunately the power of the previous tides and the grip of the sand as it had now settled even further, was too much, as a considerable amount of time had passed since the vehicle first got stuck. As station officer Gary Parsons explained, it was unfortunate that the call to BSAR was not made earlier. “Had we been called at the time the incident happened, we would have been very confident that we could have recovered the vehicle, but unfortunately we were not and now unfortunately the vehicle is a total loss and possibly now a permanent feature on the bay”.

It is perhaps surprising that people still make the mistake of driving on these treacherous sands, as Gary continued: “The Bay is simply no place for road-going or even off-road vehicles. The sands of Morecambe Bay look inviting but when people who have lived and worked all their lives on the Bay can get caught out by the shifting soft sands it proves that we should take this as a warning to those who think it looks safe to drive (or walk) across. Clearly without expert knowledge or specialist vehicles it is not”. Our thanks go to Bay Search and Rescue for this item.

For more details on their work, go to www.baysearchandrescue.org.uk where they have details of the organised walks across the bay. And it also tells you how to make donations as this is a voluntary service.