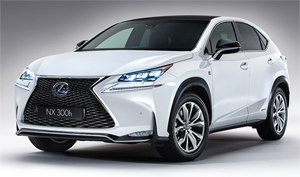 It will be a pub trivia question soon to ask which manufacturer doesn’t have an SUV in their model range. The latest to announce that it will join the party is SEAT. The Spanish company says that the compact SUV is already under development at the Martorell facility and it is due to be launched in 2016. This particular segment of the market is presently estimated to be over one million vehicles in Europe alone, so in many cases it is just that a manufacturer cannot afford to ignore the SUV area. Of course, you do wonder how this will turn out, and just what the difference will be. SEAT is part of the VW Group, as is Skoda, who build one of the best compact SUVs on the market with the Yeti. Given also that the Yeti has now been able to build itself an excellent reputation, plus it’s been a Class winner in our 4×4 Of The Year competition for the last two years. The SEAT will have to go some to beat that.
… as does Lexus.

The new Lexus NX (pictured) was debuted at the recent Beijing Motor Show and at least this new Crossover option does not look like every other model on the market. There’s no mistaking the angular Lexus front end. Three powertrains will be available in the NX range: a petrol-electric hybrid in the NX 300h; a 2.0-litre petrol turbo in the NX 200t; and a naturally aspirated petrol unit in the NX 200. The UK powertrain line-up had not been decided at the time we closed for press.