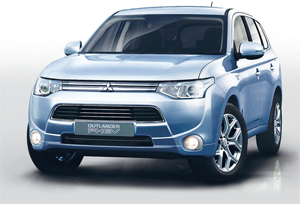 CLAIMED TO BE THE WORLD’S first plug-in hybrid SUV, the new Mitsubishi Outlander PHEV made its world debut at the Paris Motor Show. This version of the Outlander actually has three driving modes: EV Drive – all electric using drive to all four wheels from the drive battery; Series Hybrid Mode – the vehicle’s engine generates electricity for the electric motors; Parallel Hybrid – the engine provides the motive power, assisted by the electric motors as required. The Outlander PHEV uses a twin motor 4×4 system, which has independent motors driving each of the four wheels. This means that as well as having decreased frictional losses to each wheel, Mitsubishi claims that the response and dynamic control of this power distribution can be more finely deployed, when compared to a standard, conventional mechanical system. Another advantage of electric motors is that they can deliver maximum torque immediately, rather than wait as the engine revs rise for this power to be deployed. The Outlander’s conventional petrol engine is a 2-litre, four cylinder. The model will go on to the Japanese market in early 2013, but it is expected that this will then be made available in other global markets.