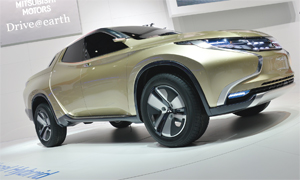 The display of battery-powered Defenders at Geneva must have led to a few inscrutable smiles, and knowing nods among Mitsubishi engineers. The Japanese manufacturer actually started research and development on electro-mobility vehicles in 1966 and chose Geneva to announce its ‘Jump 2013’ business plan, which has a clear target to make sure that by 2020, the Mitsubishi product range will include 20 per cent electric/hybrid models, the majority of which will have four-wheel drive options. The company will begin this with an extensive range of electric hybrid models launched as early as 2015. To back this up, Geneva had the Outlander PHEV on display, a model proudly claiming to be ‘the first permanent 4WD electric passenger car in series production from a mainstream manufacturer’. The Outlander is a plug-in hybrid, which means it is electric, but retains a petrol engine for when needed, but that the primary motive force is from the front and rear electric motors. Of course, having front and rear electric motors does away with the need for a propshaft, hydraulic system and clutch plate to connect the front and rear axles. Engineers claim that the instant torque facility of the electric motors gives the Outlander PHEV acceleration comparable to a V6 petrol engine.

Mitsubishi’s concept Sports Utility truck really caught the eye. Too much of the SUV market seems to be moulding into one universal look, so it’s interesting when something new arrives. The GR-HEV truck is a hybrid, with a 2.5-litre diesel engine supplemented with an electric motor. Permanent four-wheel drive, this truck has a C02 emissions figure of 149g/km (for a comparison, the market-leading Ford Ranger truck hits the road with 264g/km). After the massive change that the L200 pick-up made to the market, it seems that the company has not lost its mojo. Keep your eye on this one.