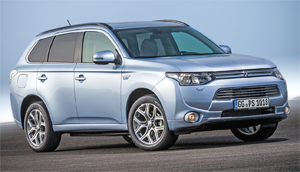 October was a significant month for Mitsubishi. Retail sales of its Plug-in Hybrid Electric Vehicle (PHEV) have now started in The Netherlands, the designated country in Europe to start what the company firmly believe will be a significant sales drive of ‘alternative’ vehicles. Impressively, Mitsubishi has 10,000 signed orders for the Outlander PHEV across Europe since order books opened in December 2012. Built at the Okazaki Plant, near Nagoya in Japan, the Outlander PHEV boasts a maximum driving range of 824km (512 miles) of which 52km (32 miles) can be in pure EV mode. The Outlander PHEV is claimed by Mitsubishi to be ‘the first self-power generating twin motor (permanent) 4WD Plug-in Hybrid Electric Vehicle, and it meets its market at a time of profound changes in the mind-set of global customers, vindicating Mitsubishi Motors’ claim of 20 per cent of its production made of electric/hybrid/plug-in hybrid vehicles by 2020.’