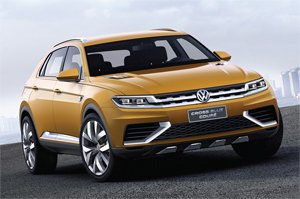 Last month at the Shanghai Motor Show, two new SUV offerings were unveiled, from two very different manufacturers. Volkswagen decided to use Shanghai to unveil the CrossBlue Coupe. What is not obvious from these pictures, however, is that this concept SUV is actually longer than a Touareg, wider, but lower – aiming to give a ‘muscular, sporty appearance’. The design concept displays VW’s Modular Transverse Matrix components set, which allows the vehicle to be built using a variety of different powertrains, and indeed aiming it at very different markets. As you would expect, this includes the option of a hybrid model that would have a V6 turbocharged petrol engine linked with two electric models; one for the front wheels, one for the rear. This would allow the vehicle to have ‘propshaft-by-wire’ off-road capabilities driving all four wheels via the electric motors. The 410bhp, and tree-stump pulling 700Nm (516lb ft) torque engine would ensure that the CrossBlue Coupe would have impressive performance of 0-62mph in 5.9 seconds, and a top speed of 146mph. And this despite the fact that the additional electric motors and batteries give the vehicle an unladen weight of 2200kg. There are said to be no immediate plans to put the CrossBlue Coupe into production, but as a concept vehicle, it seems very well finished to us.

Older readers will, like us, still find it hard to believe that the MG brand is now a Chinese manufacturer. Disbelief will be stretched further with the news that at the Shanghai Motor Show, the company unveiled the MG CS urban SUV concept vehicle. It was actually designed by MG’s Global Design Director Anthony Williams-Kenny and it is claimed that the vehicle, ‘oozes British design flair embracing the sporting DNA of MG, an iconic brand’. Hard to see in our eyes, quite how the iconic, traditional and now classic British sports car brand can in fact traverse continents and cultures to imbue yet another SUV with anything. A brand extension too far, surely. Sticking the famous, and very British, octagon MG badge on the bonnet of an SUV doesn’t quite cut it. That’s not to say it’s not a smart design. From the front it reminds us of something… oh yes, the newly unveiled VW CrossBlue Coupe.