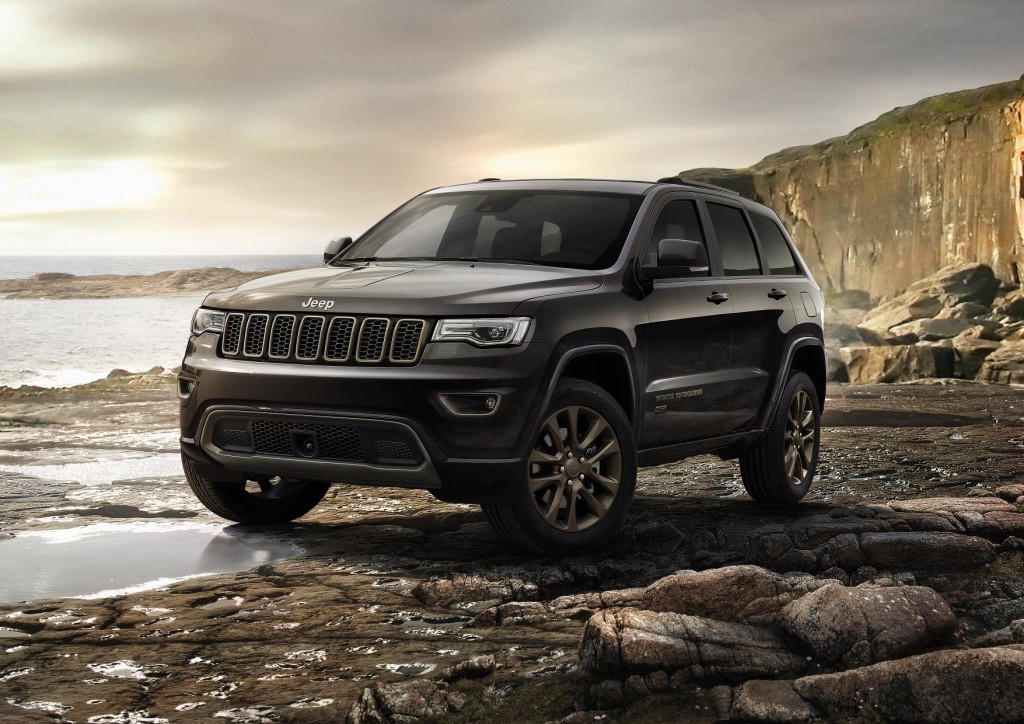 Plans to continue the success of the Jeep Grand Cherokee range of SUV vehicles have been announced, with details of enhancements to the current model for 2016/17.

In addition, and to celebrate the iconic 4×4 brand’s 75th birthday, Jeep has also revealed details of a 75th Anniversary limited edition Grand Cherokee for the UK.

Meanwhile, an addition to the SRT range of Grand Cherokees, the SRT Night limited edition has also been announced for sale in this country.

The premium, large SUV of the Jeep line-up, Grand Cherokee represents the standard in terms of power, comfort, innovation and craftsmanship. After nearly five million sales worldwide, the most awarded SUV ever continues to evolve, with stylish exterior and interior designs, advanced technological features and enhanced on- and off-road capability, courtesy of its eight-speed automatic transmission.

The latest model year Grand Cherokee now has a new Start/Stop function and electric steering which helps to achieve a 14 gram reduction in CO2 (to 184g/km), compared with the previous model year. Fuel economy has also been improved to 40.4 mpg on diesel versions.

Unlike conventional power steering, the new electric power steering system, with selectable driving modes, does not draw power from the engine and, with a resultant reduction in fluid weight, fuel savings are made, in conjunction with the new Start/Stop function.

Inside, a new, more substantial premium gear lever replaces the current aircraft-style e-shift, and a new, revised centre stack includes Sport and Start/Stop buttons. New electric power steering with selectable drive modes (Sport, Comfort or Normal) is introduced and safety features such as a ‘Stop’ function up to 7mph on the Rear Park Assist, and full speed forward collision warning are included for the first time.

It is a Jeep tradition to celebrate key anniversaries, or the conquering of inaccessible places, with special editions. And to celebrate its 75 years of history, the brand is introducing a 75th Anniversary special edition offered on all models of the line-up. One of these is the Grand Cherokee 75th Anniversary version, of which just 125 retailed examples will be available in the UK, with the vehicle available in Jeep showrooms later this month.

Based on the MY16 platform and powered by the same 3.0-litre V6 MultiJet 250 hp engine, it is paired with the eight-speed automatic transmission and the Quadra-Trac II 4×4 system.

Four colours will be available for the new 75th Anniversary car in the UK: exclusive Recon Green, Bright White, Brilliant Black and Granite.

The new, high performance SRT Night version is even more limited in number – just 30 will be available for sale in the UK, with first units ready this month.

This limited edition SRT Night version of the fastest and most powerful Jeep ever, the Grand Cherokee SRT, has a stealth-like appearance with its upper and lower grille mounts, B and C pillars and side window surrounds all coloured Matte Black. The front applique is also Matte Black, as is the ‘Jeep’ and ‘SRT’ badging on the bonnet and tailgate. The rear door features a Matte Black ‘Grand Cherokee’ badge.

Stylish ‘Black Vapor’ 20-inch wheels are finished in an exclusive Satin Black and are designed to showcase the Grand Cherokee SRT Night’s standard Brembo brakes, which give the car enviable stopping power.

The SRT Night is powered by a 6.4-litre V-8 petrol engine delivering 468 hp and 624 Nm of torque. Awesome performance figures include 0-62 mph acceleration in less than five seconds, and a top speed of 160 mph.

The 2016 Grand Cherokee SRT Night comes as standard with exclusive ‘Performance Pages’ in the 8.4-inch UConnect Touchscreen (activated by an SRT button next to the Selec-Trac controls). These have been revised with an expanded array of performance timers and gauge readouts, while all-new drive modes allow owners to personalize their driving experience both on-road and on-track.