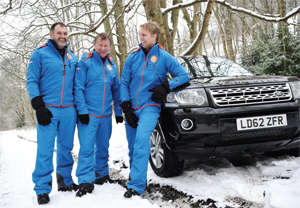 FORMER ENGLAND rugby captain Lewis ‘mad dog’ Moody recently competed in the Yukon Arctic Ultra, claimed to be the toughest Ultra Marathon in the world. Moody was supported by Land Rover who provided a Freelander 2 to help with the training. Polar adventurer Alan Chambers MBE and Phil Wall, founder of HopeHIV, were also in the team, which raised money for the HopeHIV charity. The Marathon covered a 300+ mile trek across the Yukon in Canada, for eight days with temperatures dropping to minus 50degC, not so bad if they were doing it ‘in’ a Freelander, but Moody and his team had to pull their equipment and food on sledges. Unfortunately, Moody got frostbite in a little finger, and the rules of the competition meant he had to retire. All that macho stuff and let down by your little finger! Moody was gutted to have to retire, but has resolved to return next year. Mad dog, indeed.