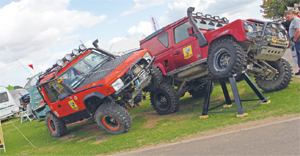 The 2011 show season ended last month with the LRO Show at the East of England Showground near Peterborough. Always the swansong to all the outdoor Land Rover and four-wheel drive shows of the year, it’s held in mid September and is often graced with better weather than the earlier shows and this year was no exception. Hils Everitt went along with her camera for a final season’s report.

Despite the good weather, there was feeling that it was a little smaller and not so well attended by the trade than in previous years, but there was a good mix of travel companies, such as Atlas Overland, Land Rover parts and build specialists, plus a healthy club showing – something that you can always rely on from the Land Rover faithful.

As far as the show season goes, it has to be asked whether there are too many. Smaller shows and smaller attendances are not restricted just to motor shows. The recent International Boat Show at Southampton, for years a massively successful event, had a significant attendance decline, and that Show included a significant show stand promoting Land Rover’s new Evoque. Given all the market and trading difficulties that we hear each morning on the news, added to what we are told is ‘reluctant retail spending’ by consumers, you have to ask yourself whether we will be seeing a similar show schedule in 2012 and beyond. Many traders will be spending the winter months seriously considering which shows to attend and whether it makes financial sense. It was a good thing, therefore, that at least the sun was shining in eastern England this September!