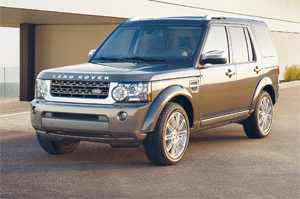 ONE MILLION MODELS LATER…
Introducing the new luxury Discovery
As we follow the Discovery story this month, with Mike Gould’s memories of the very first Discovery and the latest one millionth version (see page 52), it has been announced that there will now be a ‘Luxury Special Edition’ model. Available exclusively in Santorini Black, the new Discovery 4 HSE Luxury Special Edition looks the business, although whether it will ever find itself wandering down any overgrown, thorn-bush occupied, greenlanes we doubt! Bright silver finishing picks out the full-length roof rails and is said to complement the Noble plated door mirror caps and Titan Silver bonnet script and tailgate badge. The grille treatment is the opposite of the existing style; the grille surround and fender vents finished in Indus Silver and the grille vanes in body colour. The interior of the HSE Luxury Edition has the option of Ebony or Ivory leather upholstery, with Windsor leather covering the facia top, instrument panel binnacle, door top rolls, arm rests and pull. The interior detailing is complete with a new Dark Zebrano veneer and twist pile luxury carpet mats with contrasting edging. Take your boots off before you get in ‘ere mate… This model will be available from July with prices starting at £56,995 on the road.

RANGE ROVER IN THE RED
A new Range Rover Sport model was unveiled at the recent New York Motor Show. The HSE Red is in association with the Range Rover HSE Luxury model. Available in Firenze Red, (you can also have Orkney Grey, Fuji White, and Santorini Black) with other exterior embellishments. As with the Discovery Luxury, the Range Rover Sport Red and HSE Luxury will be on sale in the UK from July with prices starting at £58,020.

25 YEARS IN THE USA
Land Rover has just celebrated 25 years of sales in North America. The big celebratory ‘do’ included the highlights of a 1987 Range Rover Classic and 2012 Range Rover Evoque – could two vehicles underline any stronger just how much has changed with the Land Rover marque and sales potential in the massive US market? Earlier in the day, the public had been able to experience an ‘urban adventure’ in the middle of New York with a display on the off-road course which included a 1987 Range Rover, 1993 Land Rover Defender 110, 1995 Range Rover Classic and Camel Trophy Discovery and a 1966 Series IIA – for many, it was probably the first time that they had seen such a model. When it was launched, the 1987 Range Rover had an on the road price of just over $30,000, which made it the most expensive vehicle of its type. And remember, this was the time when Range Rover’s production quality control standards were perhaps not what US consumers were used to! The quality of the product was recognised, however, and since 1987 some 575,000 Land Rovers have been sold in the USA. The new Evoque is only going to raise that figure – among the 100+ awards, the new model has received the prestigious 2012 North American Truck of the Year and the 2012 Motor Trend magazine SUV of the Year.