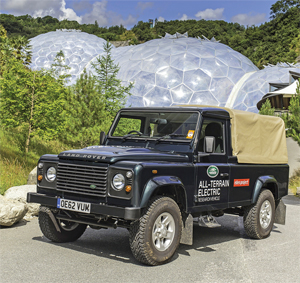 Research by Land Rover into the electric vehicle market has led to the Electric Defender vehicle going on trial at the Eden Project, in St Austell, Cornwall. The Eden Project itself is a serious environmental sustainability project and so the exposure of the Land Rover Electric Defender will be great marketing for the company. Anyone who has visited the Eden Project will know that it is built in an old quarry, which means from the public car park there’s a long walk down, which you then have to walk back up! The Electric Defender will now tow the four-carriage 12 tonne road train, carrying some 60 passengers on the six per cent incline to and from the entrance. The vehicle’s Hill Descent Control is linked to an energy regenerative braking system allowing for a lot of the whole rig’s kinetic energy to be recovered. It is claimed therefore that the Electric Defender can work for a full eight-hour day, and then be plugged in at night for a recharge that is claimed to cost only £2.00. As Jeremy Greenwood, Principal Engineer on the Electric Defender project, explained: “The Defender has been modified so it now includes a second battery. This will allow it to work a full day at the Eden Project, but also improves weight distribution and stability. In addition, we’ve linked the land train’s air brakes to the foot pedal of the Land Rover, enhancing safety.”