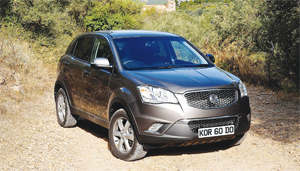 The all new SsangYong Korando crossover was exhibited in the North for the first time at Caravan and Motorhome 2011, Manchester Central.

With a full two tonne towing capacity, the Korando is one of the best tow-cars in its class, but it also marks a number of ‘firsts’.  As a crossover, the new 4×4 – which goes on sale in the UK shortly – allows SsangYong to expand from its core SUV model range.

Designed in Europe by Giorgetto Giugiaro, the new 4×4 features a monocoque construction, another first for the marque which has traditionally featured ladder-rack chassis architecture.

SsangYong will pitch this fourth generation Korando’s pricing against 4x4s such as the Ford Kuga, Hyundai ix35, Kia Sportage, Nissan Qashqai and VW Tiguan. There will be five models from launch in the UK, with two all-wheel drive options in High Line spec with either, six-speed manual or automatic transmission.