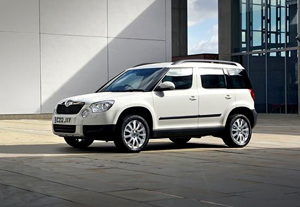 ŠKODA’s all-conquering Yeti has once again showed just how desirable it is, scooping two trophies at this year’s awards from motoring website HonestJohn.co.uk. The honours are unique in that they aren’t handed out by a panel of judges. Instead, the decision-makers are the best experts of all – the website’s users – who reward models which are most searched for and viewed.

The ŠKODA Yeti topped the Crossover category, a remarkable feat considering the SUV did exactly the same last year. The popular crossover was also on the shortlist of five models for the prestigious ‘Car of the Year’ title. HonestJohn.co.uk has an ‘Owners’ Reviews’ section, and with the Yeti gathering the highest scores of any model listed, it secured this year’s ‘Most Rated’ award.

HonestJohn.co.uk Editor Daniel Harrison, commented, “The Yeti has cemented its place as a firm favourite with our website users. To win the ‘Most Rated’ award demonstrates just how taken owners are with the car. We love the Yeti and our readers do too.”