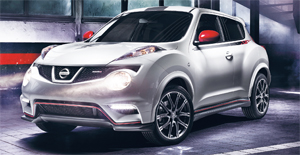 The first public unveiling of Nissan’s Juke Nismo production model took place at Le Mans in mid June, and it will make the transition from racetrack to road in early 2013. Nismo specialists have engineered a new aerodynamics kit, giving the Juke a more: ‘efficient, dynamic and powerful design’. The new model features lower front and rear bumpers, wider wings and sill side skirts, plus modified grille and tailgate spoiler. A tuned-up version of the 1.6-litre direct injection turbocharged petrol engine is inspired by the unit installed in Nissan’s amazing DeltaWing Le Mans race car. As well as featuring stiffened suspension settings and new steering modifications for sportier direct handling and improved traction control, the new model will also be available with torque vectoring. Juke Nismo will be built at Nissan Motor Manufacturing UK in Sunderland, and sales in Europe are due to start early January 2013.