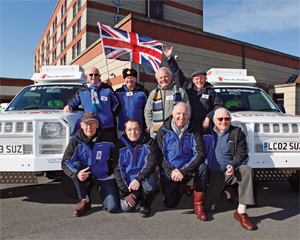 Regular readers will remember our reports on ‘reluctant retiree’ Les Carvall and his decision to get one Ultimate Challenge under his belt before the pipe and slippers took over. Les set up the ‘Heaven Can Wait I’m Busy’ charity and set off with three mates (combined age of 297) to drive across 16 countries, three continents and cross two oceans over a massive 28,000 mile challenge, all aboard two relatively standard Suzuki Jimnys. We have recently heard from Les explaining how it is all going:

“For those following on the website you’ll know we have been hanging around  Warszawa, awaiting Gary the cameraman’s passport and visa, also waiting for Mariusz to arrive, he speaks Russian, and boy did we need him. We crossed the border into Ukraine, then out again at the other end, crossed the Russian border and stayed in Russia to Samara and attended a press and photo shoot, in aid of a local orphanage. It was humbling to visit the orphanage and reluctantly we had to move on, we drove on to the Russian Kazakhstan border, crossing at Troitsk then on to Qoatanay, Astana, Pavlodar, and finally to Semey (Simipalainsk), ready to cross back into Russia and Novosibirsk, then on to Vladivostok and into Japan.

The problems we have come up against trying to get the vehicles into Japan have been insurmountable – which seems ridiculous. We had to give up trying in the end, we are shipping them direct to the US. We will visit Japan but without the vehicles. En route, the roads must be the worst in the world, pot holes as big as bomb crators, cracks, ruts and no road surface at all in some places, and policemEn behind every bush, and don’t laugh, it’s the main highway. We sheared a bolt on the rear shock absorber, but managed a welded repair. I got stopped for speeding twice in one day and had to pay cash to the police if I wanted to carry on and they told me not to say anything. I think the first time I paid them they told their colleagues to stop us the second time. The first time the it cost $100, the second time $75. Not a good day. I hope to slow down a bit when we start stage three.”

If you want to keep tracks with Les and his enterprising three mates, check out the website on www.heavencanwaitimbusy.com or the blog on www.lescarvall.blogspot.co.uk