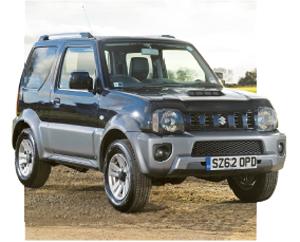 Details have been released of the 2013 Suzuki Jimny. Amazingly, 2013 will be the 43rd Anniversary of Suzuki’s first ever SUV. It’s great that the Jimny remains on the model range, standing as it does as the only small, budget SUV available in the UK with serious off-road ability – something that is recognised by an estimated 20,000 loyal owners in the UK. Design revisions for the latest model include new front bumper and grille design, new bonnet shape to incorporate a central air intake and repositioned front fog lamps. New fabric seat trim is available inside for the SZ3, with new head rest design and ISOFIX child seat mountings as standard. A new Breeze Blue metallic paint is a £399 option. We, perhaps, would have liked to see some extra oomph being added to the 1.3-litre engine, but that remains at 85bhp and 81lb ft of torque. Motorway journeys are something of a trial for the little Jimny, which truly bursts into life the minute you take it off-road. Great to see Suzuki will continue to produce the model.

Suzuki dealers offer owners a new winter tyre promotion with prices claimed to be 10 per cent lower than last winter, with storage facilities also available to look after your ‘summer’ tyres. For a Jimny, prices are around £169 each, and for the Grand Vitara £199.