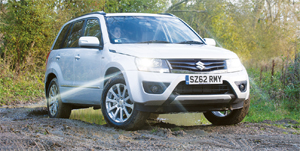 Two models that we are pleased to see will continue into 2013 from Suzuki have been announced. The amazing little Jimny enters the New Year with a few exterior and interior design updates – at no extra costs. 2013 is Suzuki’s 43rd Anniversary of the very first SUV. We are glad to see it continue – but still wonder why other manufacturers seem to ignore this ‘bargain/proper off-roader’ segment. Too small, it seems. The Grand Vitara is an SUV that we also feel deserves to continue, It’s actually the 23rd year since the Vitara was launched, itself a development from the highly innovative and important SJ series of small off-roaders. We like the fact that while the Grand Vitara might be dismissed by some as ‘just another soft SUV’ the Suzuki still boasts a low range option of the transmission. We have recently driven both the Grand Vitara in conditions that were anywhere but ‘soft’. Our feature will appear in the next issue.