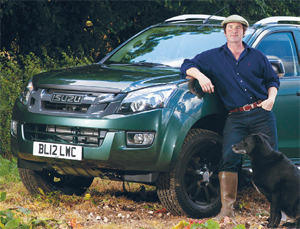 OUR TIMELY INTERVIEW with celebrity TV chef, Mike Robinson (see page 40 – December issue) comes in the same month that Isuzu has announced that it’s produced a bespoke D-Max for the keen huntsman. As you can read in our story, Mike is a keen hunter-gatherer, and enjoys doing that in a 4×4, and after a dalliance with the Land Rover product decided that the Isuzu pick-up was the thing for him, so no surprise this has come together. Mike’s actually already had two Isuzus, but this one has some nice touches just for him, including a rubber tray insert to hold his binoculars firmly in place, a secure gun box for his rifle and ammo, with special-tailored rubber grip mats on the wing mirrors to rest the rifle and take aim… To avoid glare that might distract his prey, Mike has had all the chrome bright work wrapped in matt-black vinyl. Good move in our view as the original is a touch too bling for some tastes. At the rear the D-Max has a winch and ramp for those large kills, and the load bed has a Truckman Grand Hard Top. You can look out for the truck on ITV’s Countrywise Kitchen show, as it will be working hard around the 20,000-acre estate that Mike manages.