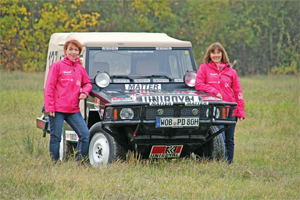 ‘Le Jog’ is the rather odd name of the endurance rally organised by the Historic Endurance Rally Association for its annual Lands End to John O’Groats event for classic cars. This year’s event had one equally unlikely entrant in a Volkswagen Iltis from the German manufacturer’s Classic Collection. This winter rally follows the theme of many classic rallies in that it is not an outright speed event, but includes reliability and navigational tests over its 1500 miles. The VW Iltis is a four-wheel drive machine that is often said to be the precursor to the Audi Quattro range, and this particular Type 183 model was a similar specification to models that have previously competed in the Paris-Dakar in 1980. Only 10,000 Iltis were ever built, but the spartan machine has played a significant part in the German manufacturer’s 4×4 heritage. For ‘Le Jog’, the vehicle was driven by the female team of Steffi Edelhoff and Sandra Wukovich, no strangers to VW and long distance events, since they have already toured the world in an Amarok pick-up raising money for the “Be your own hero e.V” – a non-profit organisation that campaigns for the autonomy and self-reliance of girls and young women.

The event is really suited to classic sports cars and sports saloons, and with less than 90bhp available, the Iltis was never going to be that quick. In the past, the event has been subject to some very severe weather and had there been snow and slippery conditions, a better result could have been expected. As it was, the Iltis split the two Range Rovers in the event, finishing 42nd overall and fifth in class. Nevertheless it’s great to see a manufacturer like VW prepared to get its ‘classics’ out of the museum and back on the road.