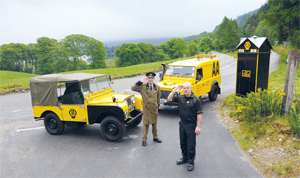 Here’s an interesting 60 year celebration to come out of our Diamond Jubilee shenanigans. The AA is to reintroduce the Highland Patrol to Scotland. Originally started in 1953, the Highland Patrol were known as ‘the troopers of the north’ and were introduced due to the increasing tourist traffic to the north of Scotland. Traffic, it would seem, that would have a propensity to break down or get stuck in the snow!

Working north of the Caledonian Canal, it was the bad weather and difficult road conditions that took up most of the Patrol’s time – there not being any other 4x4s on the roads apart from the AA’s Land Rovers or Austin Gypsys one can assume. Hard to believe that, back in the Fifties, motorists in difficulty would gain assistance by calling from an AA telephone box, which would be put through to the Road Service Centre… which was actually a large static caravan at Millburn, Inverness.

That assistance was not just for motorists, but also supported crofters with food parcels – much as what has happened in the last few difficult winters in Scotland. Of course, the other difference in those days was that, provided you were a member and proudly displayed your AA insignia on the badge bar of your car, then you would be saluted by any AA patrolman you met on the roads. How many readers can remember that? Ask your father or even grandfather about that one!

As you can see from the above photograph, the new Highland Patrol will have a suitable ‘retro’ style livery to their Land Rover Defenders but, sadly it seems, the long brown overcoats appear to have been dropped in favour of more modern overalls…