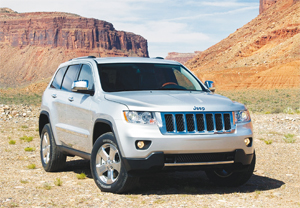 We have been rather concerned about the future of the Jeep brand in the UK after the takeover by Fiat last year. There was very little news coming out of the press of office, up until just before Christmas, but we are delighted to report that the brand will be alive and well in the UK with new models about to appear within the next few months in Jeep’s 70th anniversary year.

Apart from the impending launches of the 2011 Wrangler, Grand Cherokee and Patriot, the biggest news is that the Jeep Compass is being reintroduced which appears to be replacing the popular Cherokee. The website currently does not offer the Cherokee, but we are assured it is available by special order only, so that implies rather a wait! Jeep is being tight-lipped about its future, but we suspect it is not long for the UK – a great pity.

So, instead, we get the new Compass which is heavily styled on the new Grand Cherokee and very much aimed at the premium end of the compact SUV market. As well as the upgraded interior and exterior the Compass will be powered by a 2.0-litre petrol World engine pumping out

158bhp and 141lb ft of torque coupled with manual transmission; there is also a 2.2-litre Mercedes-Benz diesel registering 163bhp and 236lb ft, a signi cant improvement over the old model. The 4WD system is the Freedom Drive 1 which is full-time with lock mode for the centre coupling, to handle deep snow, sand and any poor traction surface.

The launch will be in April followed by a full line-up in June. The Wrangler lives on and gets a plushedup interior, thanks to upgraded materials, with more storage areas, heated seats and mirrors, new steering wheel controls for ICE cruise control phone, ESC as standard (electronic stability control) and Hill-start Assist (HSA), improved visibility thanks to larger rear windows and impressive new colours. It will be available in two and fourdoor in Sport, Sahara and a special 70th anniversary edition. Doors will be removable, those exposed hinges remain and there is a fold-down windscreen and removable Freedom Top®. Power is provided by the 2.8-litre V6 CRD backed by six-speed manual with stop-start technology or  ve-speed auto. 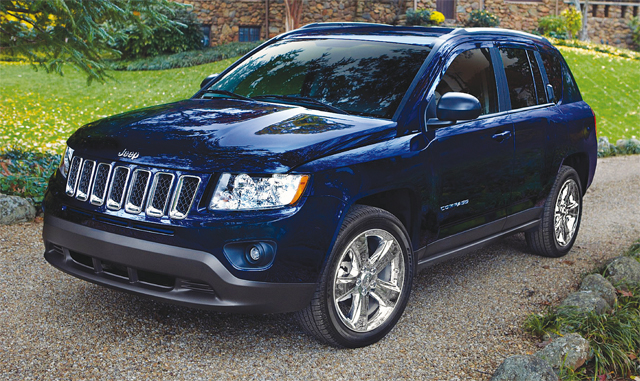 Second–generation Command-Trac® parttime with two-speed transfer case provides the drivetrain with that gorgeous low gearing we love the Wrangler for. The availability of that is ‘imminent’.

As for the Patriot, it has new front and rear, new grille and cladding. As with the Wrangler the interior has been  tted with upgraded materials with soft-touch front-door trim panels, and the new Jeep steering wheel with integrated controls. The big news is that a 2WD version will be available. The 4WD models will also feature Freedom Drive 1 with lock mode. There are two engine options: 2.4-litre petrol World at 172bhp and 165lb ft and the same 2.2-litre Mercedes diesel as in the Compass.

Three versions will be available in the  rst quarter of 2011 in Sport, Sport Plus and Limited in six-speed manual or  ve-speed auto with the option of Chrysler’s CVT2. This offers a six to eight per cent improvement in fuel consumption. And as for the new-look  agship Grand Cherokee, that has a host of updates which we have reported in previous issues when the 2011 model was revealed in the US. But to recap, these include new Selec-Terrain™ system with  ve settings – Sand/Mud, Sport, Auto, Snow, Roc – new Quadra-Lift™ air suspension, also with  ve settings – Normal, Off-road 1, Off-road 2, Park & Aero – and a VM Motori 3.0-litre CRD V6 engine delivering 221bhp and 398lb ft. There is also a host of electronic driving aids, including Forward Collision Warning.

The Quadra-Trac II 4×4 system is standard as is five-speed auto transmission on the Limited and Overland models. There’s more interior room as the wheelbase has grown by 134mm and the spare tyre compartment now includes removable dual storage bins. The new suspension, including variable-rate rear springs, means the spare can now be stored inside the vehicle and not underneath.

Although every surface of the new more luxurious Grand has been revised, Jeep has retained the classic seven-slot grille, round headlamps and those trapezoidal wheelarches; underneath these sit 18in alloys as standard or 20in (standard on Overland).

A sales forecast of 4300 Jeeps over the four models in 2011 is quite moderate but probably realistic. Jeep sees the ‘important’ Wrangler shifting 200; Patriot is expected to move 1000 units; Compass should hit 1500 and the Grand Cherokee about 600, which is low for that model because it is due later in the year in May.

Jeeps will be serviced by 48 joint Fiat/ Jeep dealerships around the UK and we are assured that quality will be improved, as Fiat has come under heavy  re recently.