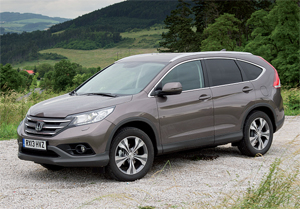 A Honda CR-V 1.6 i-DTEC competed in the recent MPG Marathon event, driven by two independent drivers, and managed a significantly impressive 77.86mpg. The test was covered over two days and included some 500+ miles over a variety of roads and conditions, at speeds that are described by the organisers as ‘real-world driving.’ While it has to be noted that the two drivers, John Kerswill and Ian McKean are highly experienced regulars at the MPG Marathon, organised by Fleet World magazine, and therefore know exactly how to drive as economically as possible, the overall result is still very impressive. Perhaps readers that actually own a similar CR-V could let us know if they have ever achieved such a figure? We would like to hear from you. And if you are looking for a particularly economical 4×4, then the Honda CR-V is now available for £239 a month on a zero per cent finance plan over three years, complete with a five year complimentary servicing plan. Contact your local Honda dealer for more details.