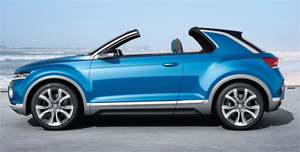 THIS YEAR’S Geneva Motor Show did not disappoint when it came to new 4x4s. Obviously the most significant model unveiled was the Jeep Renegade, and we have given this a detailed description starting on page 20 of this issue, but there were some other highlights to get the year started; special editions and new concept vehicles shown to the public for the first time.

PERFORMANCE EVOQUE
The Autobiography nomenclature has now been given to the Range Rover Evoque in what Land Rover describes as being ‘the most performance-focussed Evoque’ yet. The new Autobiography Dynamic has the Evoque’s 2.0-litre turbocharged petrol engine upgraded to 281bhp and 400Nm. This is a substantial increase of some 45bhp and 60Nm respectively, and will certainly give the Evoque a particularly sporting character when matched to the new nine-speed ZF automatic transmission. This additional power has Land Rover’s Active driveline as a standard fitting for this model (it’s optional on other Evoques) which is said to improve traction, enhance agility and also improving fuel efficiency by engaging just the right amount of drive to each wheel as necessary. The Autobiography Evoque also has upgrade suspension geometry, firmer spring rates and recalibrated adaptive dampers – while not, it is claimed, affecting the ride quality. Upgraded 350mm front brake discs have been fitted and the Torque Vectoring by Braking system is now standard, which is said to reduce understeer and therefore give a sharper handling feel.

As you would expect, the ‘connected-car technologies’ have been enhanced with Land Rover’s new InControl Apps system. This is said to be a world first in that it allows vehicle matched smartphone apps to be displayed on the Evoque’s screen with their original look and feel. Owners just download the Land Rover InControl App to their smartphone and then connect that to the vehicle for all your apps to function through the Evoque’s touchscreen. Very clever.

The overall look of the Autobiography Evoque has been changed to make it distinctive with a new grille design, lower front valance, jewel-like headlight and tail light lamps and 20inch forged alloy wheels. To date, some 270,000 sales worldwide have made it the fastest-selling Land Rover ever.

DISTINCTIVE DEFENDERS
While the enigmatic Defender continues to be produced, so do the ‘special editions’. Geneva this March saw two new offerings for the Defender XS range; the Black Pack and the Silver Pack. These models will have new aluminium finish to the vehicle’s side runners, contrasting leather finish seats, privacy glass and for the first time, an ebony Alston headliner which the company claims brings ‘a touch of luxury to the legend’. We await with interest to see if there will be a ‘last of the line’ special edition to commemorate when production eventually stops. One suspects that would sell out rather quickly.

X-TRAIL GETS LOST
We have always been supporters of the original Nissan X-Trail. Perhaps a little ‘boxy’ in design for some, it nevertheless offers what a lot of people want in that it has decent off-road abilities, while also has the carrying capacity and load space to make an excellent family SUV. It seems a shame to us, therefore, that the new X-Trail will now just be ‘another’ similarly styled SUV to everything else on the road. Since it is built on the same Renault-Nissan Alliance Common Module Family platform, it will undoubtedly lose a great deal of its present day uniqueness and off-road abilities. If it seems odd to enthusiasts like us, it apparently makes sense to Nissan as the company now claims to have ‘the most comprehensive and capable SUV crossover line-ups in the industry.’

Geneva also saw the unveiling of the second generation Qashqai, a model that has proved an enormous success for Nissan. (A full Buying Guide for the model is on page 96 of this issue.) Production of the new model is now underway at the Sunderland plant and the latest edition includes the Nissan Safety Shield, which is a suite of safety systems to provide a highly comprehensive protection package. It also has the latest NissanConnect smartphone integration system.

T-ROC CONCEPT
If the Jeep Renegade surprised the 4×4 brigade in being the first true small off-roader from a major manufacturer for some years, on the Volkswagen stand there was another new small SUV concept. The T-ROC is smaller than a Tiguan and combines the abilities of an all-wheel drive with the fun aspect of a convertible, thanks to the removable roof panels (something that the Renegade also manages). The T-ROC has integrated cameras, which project images to the driver when driving off-road. It is also powered by a 380Nm turbodiesel engine (available in the latest Golf range), has the company’s impressive 4MOTION all-wheel drive system and a newly developed seven-speed DSG gearbox. It will have three driving modes; Street, Off-road and Snow. Although only a concept, it is good to note that this has an off-road intention, the T in the name keeping it in the VW family range of Tiguan and Touareg and the ROC meaning it will be as at home ‘on rocky trails as on tarmac’. It will be interesting to see if this concept becomes a reality.

SSANGYONG NAME CHANGE
Some criticism of the latest SsangYong Rexton is that it is a somewhat old-fashioned design. Now there’s nothing wrong with that as we explain in our First Drive story (on page 25). To confirm that this is an interesting, and forward-thinking manufacturer, the Geneva Motor Show saw the unveiling of the SsangYong XLV hybrid SUV. If you can get over the claim that the XLV moniker stands for ‘eXciting Lifestyle Vehicle’, it’s an interesting new hybrid. The company claims that fitting a 48v electric motor and lithium ion battery to the 1.6-litre diesel engine produces significantly lower CO2 emissions to a similar sized SUV. Although a concept, the press release says: ‘The XLV will become one of SsangYong’s core strategic models to underpin its future growth.’ So it looks like it is on the way to production, but when it arrives, it may not be called a SsangYong. The South Korean company revealed in Geneva its intention to rebrand itself by 2017, in preparation of entry into the US. The company is owned by India’s Mahindra & Mahindra but this is not thought to be the new name, which will also include a completely new badge and emblem. This will actually be the second name change, since originally the company was the Donga Motor Co Ltd – a few Dongas even made it to the UK. The company has ambitious sales plans, and feels a new name is essential for success.