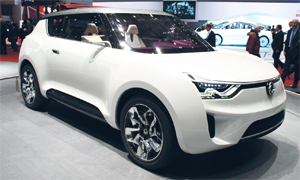 The Geneva Motor Show, which takes place every March, is a fantastic litmus test for the automotive industry. Three years ago, just after the economic crisis hit, the show was a muted affair, and there was a distinct low-key presence of 4x4s. Since then however, carmakers have dusted themselves down and started looking forward. There’s a continuing trend for going ‘green’ with alternative fuels, in particular electric, all the rage. So from the gas-guzzling image of the past, 4x4s are now looking as respectable as the Queen’s butler. And with that new polished image is the belief that we all want vehicles that can go anywhere, anytime and in any weather. So there seemed to be a proliferation of SUV and crossover style vehicles.

Jeep had a fairly low-key show following the positive past couple of years. VW had a strong show, especially with its stylish Cross Coupe concept. Land Rover has become accustomed to stealing the show in recent times, and Geneva 2012 was no exception. Having dazzled us with the DC100 concept in Frankfurt last September, this spring the Evoque Convertible was unveiled; claimed to be the first premium SUV convertible, we’re sure it’ll be a huge hit. Someone on the stand commented that it “returns us to our roots when the ‘Series 1’ had just a canvas roof…” We’re not sure that’s quite the association the brand had in mind, but, judging by the reaction on the stand throughout press day, it should prove hugely popular.