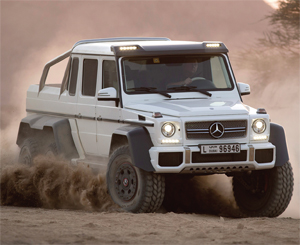 HOW ABOUT THIS for a fantastic off-roader! Introducing the awesome Mercedes-Benz G63 AMG 6×6. Sadly it seems this is only a show version at present, but does at least indicate that Mercedes has not forgotten its G-Class range. Six driven wheels, low-range, portal axles, no less than five differential locks which can be engaged on the move and a tyre-pressure control system which allows the pressure in the huge 37-inch tyres to be adjusted while the vehicle is running. The AMG V8 bi-turbo engine has 544bhp and 760Nm of torque, transmission is the AMG Speedshift Plus 7G-TRONIC automatic, paired with the front drive system from the G63 AMG and a rear twin drive train from the 6×6 version. The two G63 AMG 6×6 vehicles, which have been built to date, were developed at the Mercedes-Benz G-Class development department in Graz, Austria, the centre for all ‘G’ projects today and where the original G-Wagon was built. It seems that these have been built to judge response and to see if they should put them into series production. Well, we don’t need asking twice, but then we are not about to sign a cheque to buy one. Given that a ‘normal’ AMG G-Class starts at around £80,000, one can only wince at what these 6×6 versions might actually cost. You’d have one though wouldn’t you?!