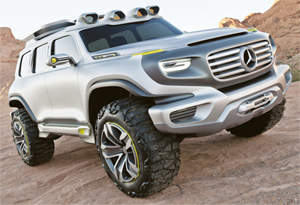 If you think the pictures here look rather like something from a futurist Mad Max/Judge Dredd science fiction film, then you are probably not far from the truth. This is the result of the Los Angeles Design Challenge to find a ‘Highway Patrol Vehicle 2025’ and is the Mercedes-Benz entry, rather awkwardly called the Ener-G-Force. According to Gorden Wagener, Director of Design at Mercedes-Benz Cars: “The Ener-G-Force is the vision of an off-roader that, while reflecting tomorrow’s adventures, also invokes the genes of the Mercedes-Benz off-road icon, the G model. Modern and cool, it could also be a clue about a new beginning for the off-road design idiom of Mercedes-Benz.” It seems that the competition fired up the guys at Mercedes-Benz in such a way that they also decided to produce a ‘civilian’ version, which is what you see here. Given the slab-sided, box-like, shape of the original iconic G-Wagon, it’s fair to say that this is a significant departure. As design studies go, it is certainly radical, according to the details released by Mercedes: “The Ener-G-Force stores recycled water in tanks on the roof, and transfers it to the ‘hydro-tech converter’, where natural and renewable resources are converted into hydrogen for operating the fuel cells. The storage units for the electricity generated in this process are housed easily accessible in the striking side skirts. The Ener-G-Force emits nothing but water, has an operating range of about 800 kilometres and as a result truly is a green car. Four wheel-hub motors, whose output for each individual wheel is adapted precisely to the respective terrain by high-performance electronics, provide the pulling power.”