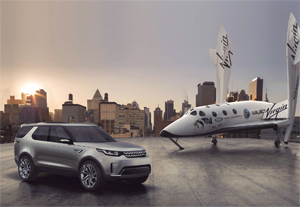 The Discovery Vision Concept was launched in New York, alongside a scale model of the Virgin Galactic spacecraft. How appropriate. Jaguar Land Rover has announced a partnership with Richard Branson’s commercial spaceship project, and as the details of JLR’s latest 4×4 are revealed, you have to admit that the company’s future plans for the humble SUV are a world away from what most of us drive, both on and off the road.

Among all the astonishing innovative features, and dubious marketing descriptions, one comment from Gerry McGovern, Design Director and Chief Creative Officer for Land Rover summed up the new vision succinctly when he said this was, “a significant shift from Discovery as we know it.”

Firstly, it must be remembered that this is the Discovery Vision Concept and not, yet, a production reality. Whether all the technological wonders announced will make it to the production version of the new Discovery when it is launched next year remains an intriguing question. What is more likely, however, is that this is actually what the 2015 Discovery will look like, probably as the heralded Sport version. First impressions? Well, while it obviously ‘fits’ perfectly into the family for Range Rover, Sport and Evoque, it doesn’t take the breath away. However, like most readers we have only seen the pictures, what it looks like in the metal, on and off the road, will be the real test. From some angles it has the sleek sporty look of the Evoque, yet from head on it seems to retain the very upright, narrower and taller, stance of the present Discovery, and this is necessary for it to carry the seven adult passengers in comfort. Indeed, the images here show that the Discovery Concept has rearward hinged rear doors making easy access and egress for all seven occupants. That is simple to achieve in a concept vehicle, but will such a design allow for the torsional stiffness of the body structure necessary for a production reality? At the rear, there’s a deployable rear sill step and folding bench, which creates ‘a flexible event platform with social seating for active lifestyles’. The interior cabin looks plush and luxurious but is finished in washable, water and oil-repellent, Foglizzo leather that it is claimed can be cleaned in seconds. Wood veneer on the floors and Harris Tweed accessories complete the ‘British feeling of quality and craftsmanship’ interior – it was launched in New York, don’t forget. 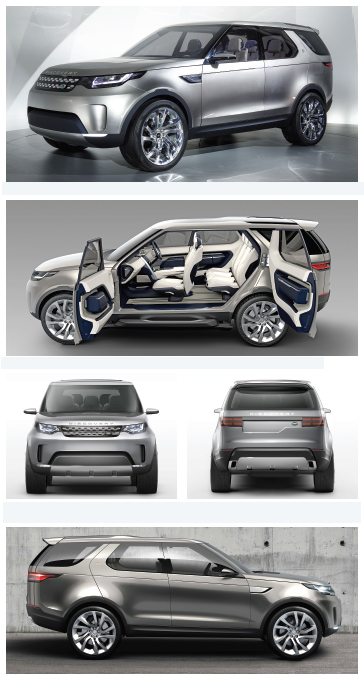 But it is really the technology that astounds. The Discovery Concept has what is called ‘the next generation of Human-Machine Interface technology’. This allows for video calls between passengers through the seatback infotainment screens. The vehicle has Smart Glass which brings, ‘the power of augmented reality to the entire glasshouse.’ Other functions in the vehicle, including the doors, indicators, headlamps and seatback screens, are operated by what is called Gesture Control. But before you despair completely, let’s move to what are the technological developments that interest us the most.

This vehicle will have Remote Control Drive, which will allow the driver to manoeuvre the car at low speed, while standing alongside. This interesting development would aid coupling a trailer, and also allows the driver to do his or her own ‘spotting’ when off-road. PlayStation augments reality indeed.

The off-road driving options are also increased with the fascinating head up display system. Cameras below the grille scan the terrain ahead, terrain that is out of eyesight of the driver, and the images are projected onto the windscreen. The affect is as though you are seeing the front wheels and route ahead, ‘through’ the bonnet. Add to this Laser Terrain Scanning, which has infrared lasers scanning the terrain ahead, these lasers then render a high definition contour map onto the vehicle’s instrument display. This information is then fed to the All-Terrain Coach guidance system, which then suggests the best route. Then we have Wade Aid, where lasers are used to measure the depth of water before the vehicle enters. Presumably the military applications of all this impressive technology will also earn JLR significant revenue.

Land Rover has had an enviable reputation for vehicles that can traverse all terrains that dates back to 1948. Now it seems, the vehicle really is in charge and it takes that ethos to a whole new dimension with the All-Terrain Progress Control said to enable ‘semi-autonomous off-road driving at a steady speed across varying terrain.’ At the launch in New York, Dr Wolfgang Epple, Director of Research and Technology at JLR said: “As a true pioneer, Land Rover is committed to constantly pushing the boundaries to redefine what SUV capability and versatility is all about. The Discovery Vision Concept shows the breadth of innovative, intelligent technologies being developed to offer our future customers unprecedented capability across any kind of terrain.”

While remembering that this is a Concept, you have to look at the vehicle parked alongside Mr Branson’s spaceship and wonder which one impresses the most…