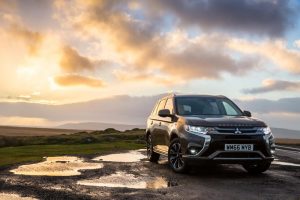 The Mitsubishi Outlander PHEV is the UK’s best-selling Plug-in Hybrid Electric Vehicle. At its introduction in 2014 it effectively created the ultra-low emission vehicle segment, notching up 10,000 sales in the UK within the first ten months and amassing a total sales figure of 26,600 by the end of 2016. The vehicle is derived from the third generation of the Mitsubishi Outlander (which pioneered the ‘cross-over’ vehicle design concept with the Mitsubishi Airtrek in 2001 and has sold 1.5 million units globally since launch) but was developed from the ground up to be driven by either an internal combustion engine or hybrid technology and as a result there are no compromises in terms of packaging, practicality or drving dynamics.

For 2017 Mitsubishi introduces a new EV Priority Mode across all variants. The new EV switch is located below the 4WD button and once activated, it allows the driver to operate the vehicle in EV mode without the engine starting, provided there is sufficient charge in the batteries. An electronic parking brake is also new to the 2017 Outlander PHEV, as well as the brake auto hold button function which, when activated, holds the vehicle in traffic or on an include the same way a handbrake would, allowing the driver to release the footbrake.

Across all variants, the 2017 Mitsubishi Outlander PHEV powertrain and chassis has been revised, with new dampers and rear suspension bushes, making it a quieter and more refined to drive than ever. Rapid charging has also been improved, reducing its charging time to 80% from 30 minutes to approximately 25 minutes, and its pure electric range is increased to 33 miles, up from 32 miles. The 2017 Outlander PHEV also delivers more performance with improved acceleration in EV mode compared to its predecessor. CO2 emissions have also been lowered by 1g/km to 41g/km, with an average weighted fuel consumption of 166 mpg – a 6.4% increase versus the previous version. Regenerative braking technology, which works to put lost energy back into the battery when slowing down and which can adjusted while driving using the steering wheel paddles, has also been upgraded for 2017 Outlander PHEV – the drive battery output has been improved by 10%.

Safety features have also been further developed and improved on the 2017 Mitsubishi Outlander PHEV. Forward Collision Mitigation technology, standard on the Mitsubishi Outlander 4hs and 5hs versions, now features Pedestrian Detection for added safety, while Blind Spot Warning and Rear Cross Traffic Alert have both been introduced on the 4h variant to assist the driver when reversing out of a space. For example, if traffic is coming from the right, the icon located on the right-hand mirror will light up, accompanied by an audio alert.

Another colour has been added to the Mitsubishi Outlander PHEV colour palette in the form of Cool Silver. A shark-fin antenna is now incorporated in the roof line and there is a secure charge-point cover linked to the central locking. For a more refined exterior look, Outlander PHEV also features silver roof rails, as well as clean chrome accents on the sills.

Inside, the new Electronic Parking Brake and auto-hold button are located to the right of the 4WD and the new EV Priority Mode switches on the centre console. The console, and other key surfaces, have been finished with a black ash design and chrome accents and, as before, it is extremely well finished with soft-touch switches and ambient lighting flooding the floor area and centre console box. A four-spoke heated steering wheel, with a thick high-grip rim, fine leather trim and multiple control switches, completes the upmarket cabin feel.