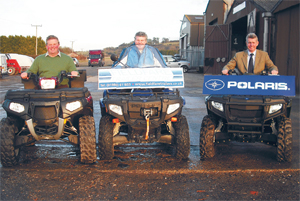 Would you drive the length of the country – on an ATV? Well, three hardy farmers will be doing that this month to raise money for children’s cancer charities and Southampton Hospital. Wiltshire farmer and Network Grain UK director, Jerry Bailey, NFU South Wiltshire Group Secretary, Steve Bartlett and East Yorkshire farmer and Green Pea Company director, Nick Baker, will ride their bikes from John O’Groats to Lands End in memory of Jerry’s son Robert Bailey, who lost his fight against cancer back in 2008 at the age of  only 13. “We are hoping to raise a total of £15,000 to go to the Children’s Cancer and Leukaemia Group, CLIC Sargent (Cancer and Leukaemia in Children) and the Southampton Hospital Charity,” said Jerry Bailey who farms at Ford near Salisbury. The farmers will be riding three new All Terrain Vehicles, kindly supplied by Polaris UK. They will leave John O’Groats and aim to reach Lands End by the end on May, in eleven days.

“The plan is to cover as much of the distance as we can off-road and to start off by heading for the West Coast of Scotland along some mountain passes, before taking the ferry over to Arran and then crossing over to Ayrshire and then into Dumfriesshire,” he added. From there the three plan to travel down through the Lake District and Peak District. “As we travel through the Midlands we will make a stop at the UK Polaris headquarters at Coleshill near Birmingham together with the NFU Mutual offices at Stratford-upon-Avon, who are also supporting the trip, before we head for Oxfordshire then onto the Salisbury Plains and Dartmoor.” Sponsorship donations for the trip can be made by visiting the Virgin Money Giving website: www.uk.virginmoneygiving.com/team/baileybartlettbaker