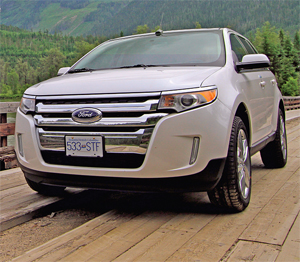 The Ford Edge Concept is the new large SUV due for Europe. We say ‘new’ but it has been available in North America for some time, we drove one through the Canadian Rockies last year (4×4, January 2013). As you would expect, it’s a highly competent SUV, and the model we drove was very highly spec’d. This latest generation model due for Europe will include all the latest technology of self-parking and obstacle avoidance. It is said to have a sleeker and sportier appearance, and will offer improved fuel efficiency. Our drive in the V6-engined model in Canada confirmed that the consumption was OK for the size of vehicle, although you have to balance the fact that we drove it in ‘Sport’ mode most of the time, and that fuel is cheaper even in the Rocky Mountains than back here in Surrey! It is expected that the Edge will be available in Europe towards the latter half of 2014, although whether that includes the UK has not been confirmed. Obviously, no prices have yet been announced.