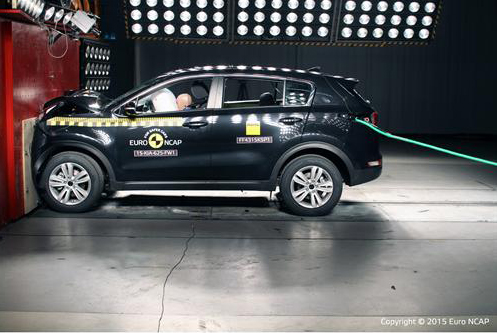 The all-new Kia Optima and Kia Sportage have both been awarded the maximum five-star crash safety rating by Euro NCAP in the latest round of safety testing.

Both the Optima and Sportage scored particularly highly for adult protection, scoring 89 per cent and 90 per cent respectively, with child occupant protection also rated highly at 86 per cent for younger Optima passengers and 83 per cent for those in the Sportage.

The Optima was praised in particular for its ability to offer uniformly high levels of protection to all occupants during the frontal offset test and in the event of a side barrier impact, no matter the size of passenger or where they were sitting in the car. The Sportage – Kia’s European best-selling compact crossover – was also commended for its ability to protect passengers of different statures in all seats, scoring particularly highly in the demanding side pole test.

As a means of offering the best possible protection to occupants, active safety assist technologies are key features in new Kia models, resulting in both cars scoring 71 per cent in the ‘Safety Assist’ category – an increasingly important part of NCAP’s independent testing process.

Standard-fit Vehicle Stability Management (VSM) in each car ensures stability in a wide variety of conditions, particularly if the driver needs to brake while cornering, through careful control of the Electronic Stability Control (ESC) and electric motor-driven power steering. VSM and ESC are activated as soon as the car’s sensors detect a loss of traction, helping the driver remain safely in control of their vehicle.

The all-new Optima is available with Advanced Smart Cruise Control, which automatically adjusts the car’s speed to maintain a safe distance from the vehicles in front.

The structures of the all-new Optima and Sportage are significantly stronger than the models that they replace, largely due to the more widespread use of stronger Advanced High Strength Steel (AHSS).

50 per cent of the bodyshell of the all-new Optima is now made up of AHSS – representing a 150 per cent increase over that of the previous car (20 per cent) – and boasts a 450 per cent increase in the amount of structural adhesive used. The result is that torsional rigidity has been improved by 50 per cent over the model that it replaces, while the body shell is also 8.6 kg lighter. The Sportage boasts an even more extensive application of AHSS, rising from 18 per cent of the bodyshell in the third-generation model to 51 per cent in the new fourth-generation Sportage. By dramatically strengthening the core structure of the new Sportage, torsional rigidity has been improved by 39 per cent from one generation to the next.

Passive safety is further ensured with airbag protection for all passengers and the standard fitment of ISOFIX child-seat tether and anchor points in the second row, to safely secure younger passengers.

The all-new Kia Optima is on sale from 5 January in the United Kingdom. The all-new Sportage – manufactured at Kia’s state-of-the-art manufacturing facility in Žilina, Slovakia – is due on sale during Q1 2016. Every model in Kia’s line-up is sold with the brand’s unique 7-Year, 100,000 mile warranty.