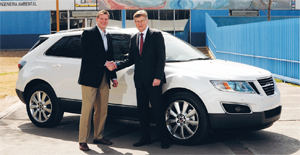 The first Saab 9-4X crossover to be commercially produced has now rolled off the assembly line at the Ramos Arizpe plant in Mexico.

The first vehicle, an Ice Pearl metallic Aero model with a 2.8V6 turbo engine, is bound for a media test drive event in the United States before being shipped to Sweden for display at the Saab car museum.

Featuring Saab’s XWD all-wheel-drive system and adaptive chassis control, the 9-4X goes on sale in the US in May, UK sales start late 2011 and Europe and other world markets are scheduled to begin from August.