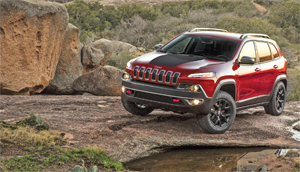 The first Jeep product of the Fiat/Chrysler alliance is revealed. But will the all new Cherokee persuade potential Freelander owners to change tack?

You are looking at pictures of a very significant new Jeep; the company’s most significant new model for many years. This is the first product of the Chrysler/Fiat alliance and the first Jeep, ever, to be built on a Fiat floor pan!  The new Cherokee is built on what is called the Compact US Wide platform, to allow for a modular build, which saves the company time, tooling and, of course, money. A version of this platform is used in the Alfa Giulietta. It’s the way the global motor industry works these days, and why we have such a massive range of vehicles available on our roads. But is it a Jeep, then?

There’s no mistaking a European SUV approach with the overall body shape, which makes the fact it was designed in the US a little surprising at first. However, the American heritage is very evident with the significant inclusion of the famous Jeep grille at the front. The new Cherokee was unveiled at the New York Motor Show last month, and as yet, we have not seen the vehicle in the metal and so are relying on the pictures shown here. From the rear, and the side, it’s undeniably European in its aspect, but from the front there’s no mistaking where it’s from; it’s certainly a brave and dramatic design.

The importance of the model cannot really be understated, and not just because it’s the first to be built under Fiat’s influence. The company needs this model to sell well, and it enters the mid-range SUV market that is already highly competitive. The hope will be to drag people away from the Freelander into something a little different. “The all-new Jeep Cherokee will be the benchmark for mid-size SUVs with a new level of on-road driving dynamics and fuel economy, while at the same time improving the 4×4 capability that customers expect from Jeep,” said Mike Manley, President and CEO – Jeep Brand, Chrysler Group LLC, at the vehicle’s unveiling in New York.

If you are still unsure about the looks, we can at least be reassuring that there is plenty of ‘Jeep’ underneath. The model range will be available with no less than three different 4×4 options.

The Jeep Active Drive I system is the fully automatic option, requiring no driver input. Not perhaps something to enthuse about, but it does mean that Jeep now have an option that can rival the likes of Honda’s CR-V and Toyota’s RAV4. The Jeep Active Drive II option has low range (2.92:1 reduction). The ride height has been raised by an inch and, according to Jeep, ‘allows for enhanced climbing ability as well as outstanding crawl ratios for severe off-road conditions’. Things improve further with the Jeep Active Drive Lock version, which adds a locking rear diff to the Active Drive II model. All three 4×4 systems have Jeep’s Selec-Terrain traction control system, with five customised settings: Auto, Snow, Sport, Sand/Mud and Rock. The system includes a drivetrain control module, electronic brake controller, electronic stability control (ESC), transmission controller, powertrain controller and Selec-Speed Control (which incorporates both hill-ascent and hill-descent control). These models will be available in Sport, Latitude and Limited specification and trim options.

Top of the list, is the Cherokee Trailhawk which will get the famous Trail Rated treatment. As you can see from the pictures here (left and below), the Trailhawk gets the more aggressive body architecture, with better approach and departure angles (29.8deg and 32.1deg respectively), a one-inch suspension lift (ground clearance is then 8.7in), the Active Drive Lock option, underbody protection and ‘signature red tow hooks’…

Announced in New York were two engine options; the gloriously titled 2.4-litre, four cylinder, Tigershark MultiAir, and the 3.2-litre Pentastar V6. As yet it has not been announced whether Europe will get both options. It’s also questionable whether the Trail Rated Trailhawk option will come to the UK – disappointing if you fancy red tow hooks.

The MultiAir technology is from Fiat and significantly aids consumption and emissions. It is said that the 2.4-litre model has a 45 per cent improvement in consumption over the out-going (US) Cherokee model, and a claimed range of some 500 miles. It also has 184bhp and 171lb ft (232Nm) of torque. The V6 is the latest version of a very popular US engine, in its new format this offers 271bhp and 239lb ft (324Nm) of torque, and it must be hoped that we get this version over here. The new Jeep Cherokee will have Chrysler’s new nine-speed automatic transmission, which Chrysler claimed in the US would be the first SUV so fitted. In doing so, the company seems to be ignoring the announcement of the Range Rover Evoque nine-speed, which was also unveiled (featured in last month’s issue).

The new Cherokee will be available to US customers in the third quarter of this year, and it is expected that we will see models in Europe in early 2014. The model is being built in the American Toledo plant, but given what is effectively a Fiat ‘chassis’ you must wonder if it could be built in Europe. At this time there are no details about what models we are likely to get, and obviously no prices – there will be people in Fiat’s accounts’ department looking anxiously at exchange rates later this year, that’s for sure! This is a model that has to be a success for the company; and that’s a global, not just US, success. Is it too ‘soft’ an SUV for true Jeep enthusiasts? Maybe. But then that is not who Fiat/Chrysler is aiming this vehicle at, they need to expand their market, tempting potential Freelander owners, and at first glance, it looks as though the new Cherokee could do exactly that.